Life in a Jar 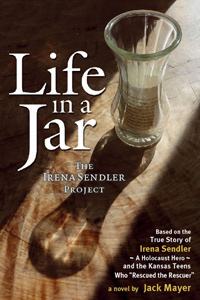 Life in a Jar

“Sometimes our light goes out, but is blown again into instant flame by an encounter with another human being. Each of us owes the deepest thanks to those who have rekindled this inner light.” Albert Schweitzer. Epigraph for Life in a Jar: The Irena Sendler Project by Jack Mayer

Kathleen planted Jack Mayer’s Life in a Jar into my hands as soon as she finished reading it. Casey, her old friend from Hoosick Falls, had mailed us his neighbor’s copy. Some books hook you quickly, and this was such a book; however, as I continued reading and discovered the story within the story, I found myself hooked again. I read it on the exercise bike at the Y. I canceled plans, stealing time to read. Although neither the owner nor the two previous readers had damaged the book or written in it, after reading it I felt that I owed the owner a fresh copy. It had become my book. We bought a replacement along with several loaner copies. Like Casey, my wife and I became part of a chain of people spreading good news, one book at a time.

Readers often gleefully speed through terrifying books. The terror I found in Life in a Jar was not of the titillating Stephen King variety but the real thing, knowingly and purposefully inflicted on innocent people. The Warsaw Ghetto. Umschlagplatz, Treblinka. Not exactly beach reading. I wanted to learn more about Hitler’s killing Hell and about its brave victims, survivors and rescuers but simply reading about it proved bitter medicine, so I rushed through those passages, mindful that at any point I could end my discomfort by putting down the book. When I imagined how I might react if I were a father in the Warsaw Ghetto, I thought my head would explode. What could any resident of wartime Warsaw, even someone living outside the Ghetto, possibly do when confronted by such organized horror? Quite a lot, it turns out.

Irena Sendler saved more than 2,500 Jewish children from the Warsaw Ghetto. In time, it became clear that no one in the Ghetto would survive. Sendler knew that she must do all she could do to save their lives; somehow, she also knew that she must try to save their identities, which is to say, their stories. She found hiding places on farms and created false names and backgrounds for Jewish children to blend into Catholic families, convents and orphanages. If the children were lucky, their new identities could save them, but Sendler insisted on saving also their names, their Jewishness. She wrote each child’s new name and old name on a piece of paper. These lists went into jars, which she buried under an apple tree behind a house on Leharska Street (a block whose neighbors successfully hid 40 to 50 Jewish children)—across the street from an SS barracks.

Stories about survivors and their rescuers ought to resonate over the decades, informing generations about survival and courage in the face of genuine evil and impossible odds, but of course most stories endure not much longer than the lives of the people who are their subject and of those who knew them. And tyrannical governments, like that of Communist Poland, suppress stories that do not fit their paradigm. Like trainloads of Jews in wartime Poland, stories like Irena Sendler’s vanish too. Decades of Holocaust research produced scant mention of her. In such plowed ground, what could a trio of American high school students unearth? Quite a lot, Life in a Jar tells us.

To paraphrase a USA Today article, Life in a Jar: The Irena Sendler Project tells the story of three Protestant girls in Kansas who in the fall of 1999 discover the story of a Catholic social worker who saved the lives of thousands of Jewish children in the Warsaw Ghetto. Liz Cambers, Megan Stewart and Sabrina Coons, under the guidance of social studies teacher Norm Conard, researched and authored a one-act play about Sendler, Life in a Jar, for National History Day, an extracurricular activity. They performed the piece in competitions, gaining recognition and learning more and more about the rescuer whose story had been mostly lost to history. Ripples from their work reached across the ocean and across time. When author/pediatrician Mayer learned about their story and about Sendler’s, he wrote Life in a Jar: The Irena Sendler Project. In it, the girls’ story (and likewise, Irena’s story within theirs) shows that ordinary individuals can and do make a difference. The Life in a Jar Foundation, an outgrowth of the girls’ work, helps students and teachers develop similar projects; their Irena Sendler Project team has given over 300 performances of the play.

Last Sunday, Kathleen and I drove to Falmouth High School, near Portland, Maine, where we watched Megan Stewart Felt, one of the original young Kansas playwrights, and her fellow cast members perform the play she co-authored fifteen years ago. We spoke with Megan and her teacher “Mr. C.,” Life in a Jar Foundation co-founders and staff members, about their work and told them how much their story and Irena’s story had affected us. We bought another loaning copy of the book. Before the play, we listened to work by poet Anna Bat-Chai Wrobel, a teacher at the high school and the daughter of Holocaust survivors. Through the brief but moving poetry reading and the bare bones production, we sat in a mostly empty auditorium, transfixed by what we were seeing and hearing. By their presence and their stories, these people had made the auditorium a special place, holy. Like Irena Sendler, they had shown what an individual can accomplish.

Irena Sendler did not begin rescuing doomed Jewish children with a grand plan. One small act led to another. Like seasoned trackers, the Kansas teens followed Irena’s trail one step at a time, not knowing where it would lead. They did small things, which gathered in importance. Most of us will not experience what Sendler and the Kansas high school students did. But we never know when a personal encounter will blow our extinguished light back into full flame, allowing us to see a choice that might lead somewhere good. It happens to the least among us. At the end of Raymond Carver’s “Cathedral,” the short story’s self-absorbed narrator haltingly sketches a cathedral at the request of his wife’s blind houseguest, allowing the stranger to place his hand atop his own as he works on the drawing. Then, at the blind man’s urging, he closes his eyes and continues drawing. Deftly led by the wise blind guest, he ventures beyond his protective cynicism to glimpse what his emotional blindness has never let him take in: life from another person’s perspective. Finished his drawing, he keeps his eyes closed, even when the blind man asks him to take a look at his work and tell him about it:
My eyes were still closed. I was in my house. I knew that. But I didn’t feel like I was inside anything.
“It’s really something,” I said.
Like Carver’s narrator, I closed my eyes at one point during Sunday’s presentation. I felt the presence of the missing–lives lost and lives saved. Saw mothers surrendering their little ones to a woman, a stranger, knowing that they will never see them again, praying that this Polish woman will smuggle their children out of the Ghetto to where they might survive Hitler’s Hell. I opened my eyes and watched and listened to stories that had little chance to survive but did. I knew the sadness and fear of those mothers and fathers and rescuers but also their love, courage and steadfastness. Felt the weight and power of the simple act of remembering.